How do you cope with the pressure of designing something that will not only stand out from thousands of other books but entice the reader to look inside? To perfectly convey or hint at its contents?

Our students at Shillington are regularly tasked with design briefs to produce their own editorial covers of popular titles. Here, we share some recent superb examples of book designs that we wish existed so we could add them to our own shelves.

For an alternative version of French Complexion by Christine Clais, Aimee Harel photographed lots of cotton buds, cotton wool, flower petals and creams to create a pretty, repetitive background. We love the little squiggles of lipstick too. 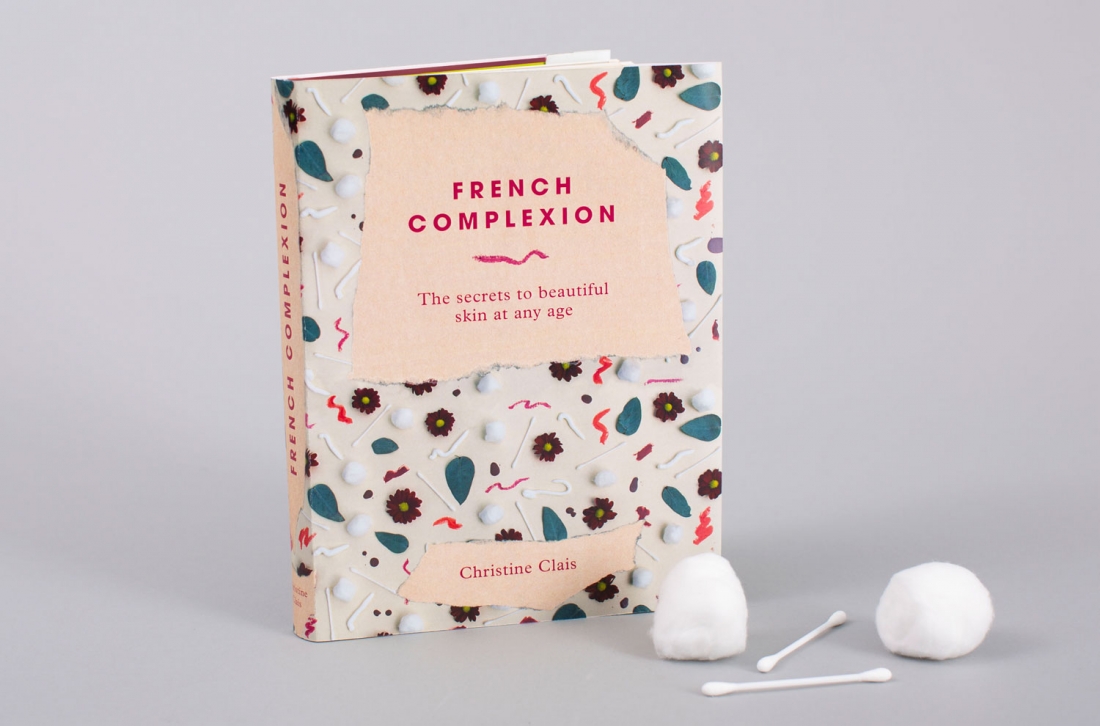 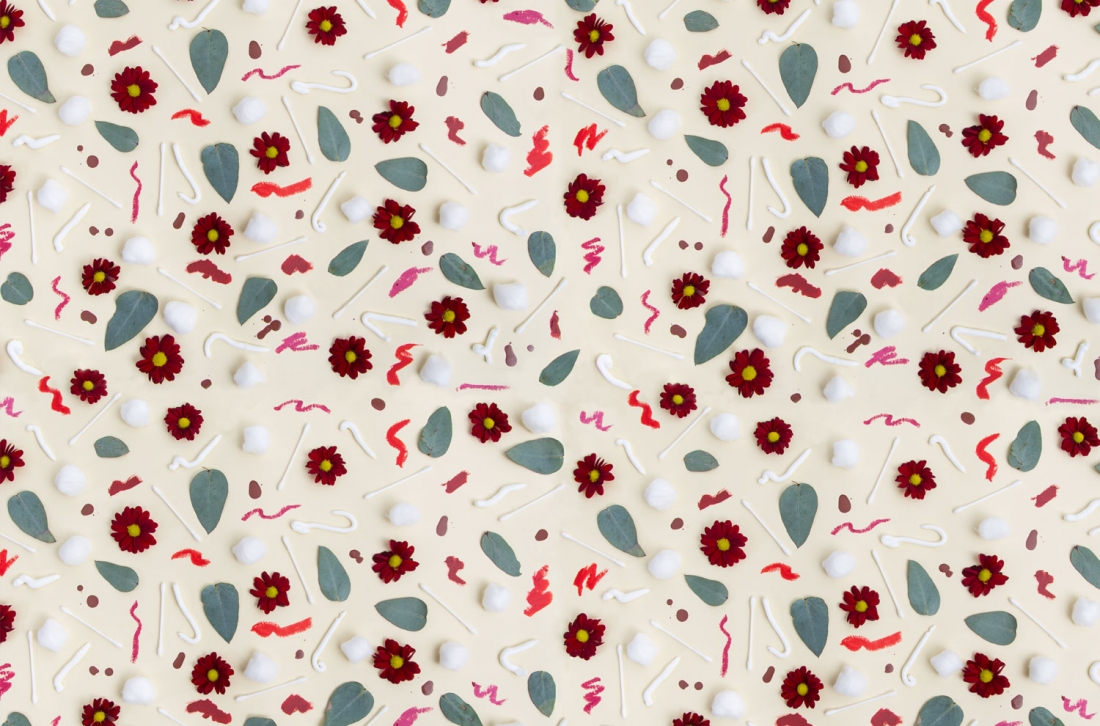 “I designed a book jacket for one of my favourite short story collections, Cosmicomics by Italo Calvino,” says Caroline McClain. “The book is a collection of imagined creation stories; for the cover design, I focused in particular on a story called All at One Point, describing crowded living conditions before the Big Bang.” 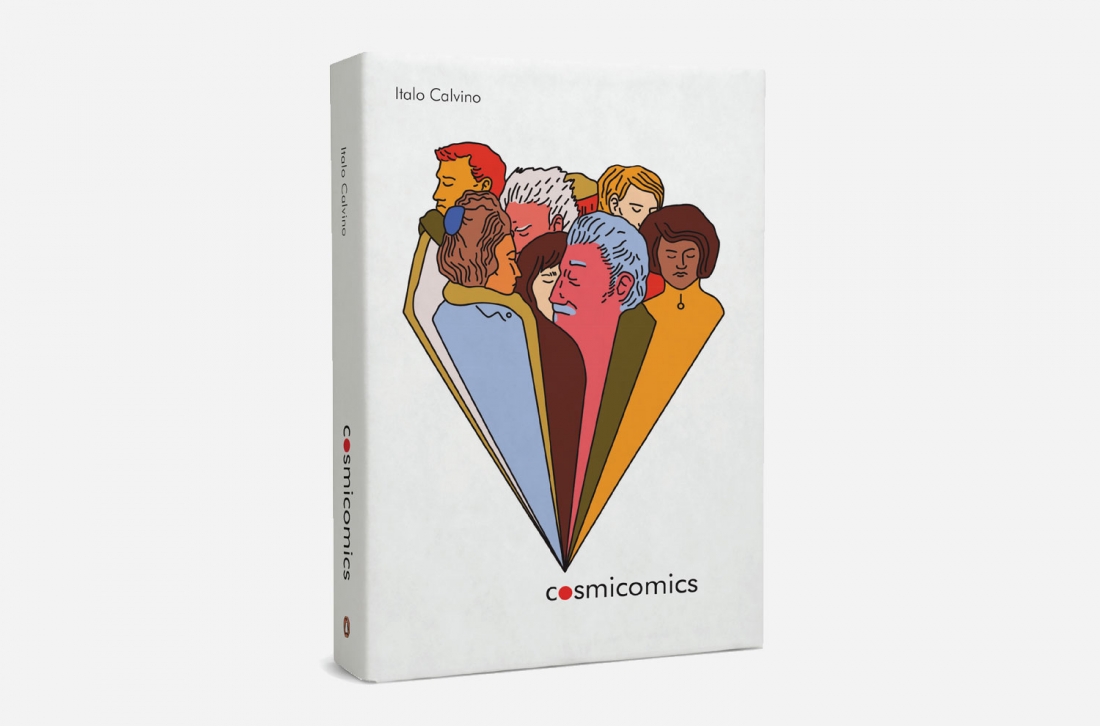 For her student brief, Caroline Robinson was asked to design a cover that represents the book, The Gardening Year, and produce a piece of handmade art that can be used as the central creative feature. Caroline rolled her sleeves up and produced beautifully intricate felt food before photographing her crafted creations. 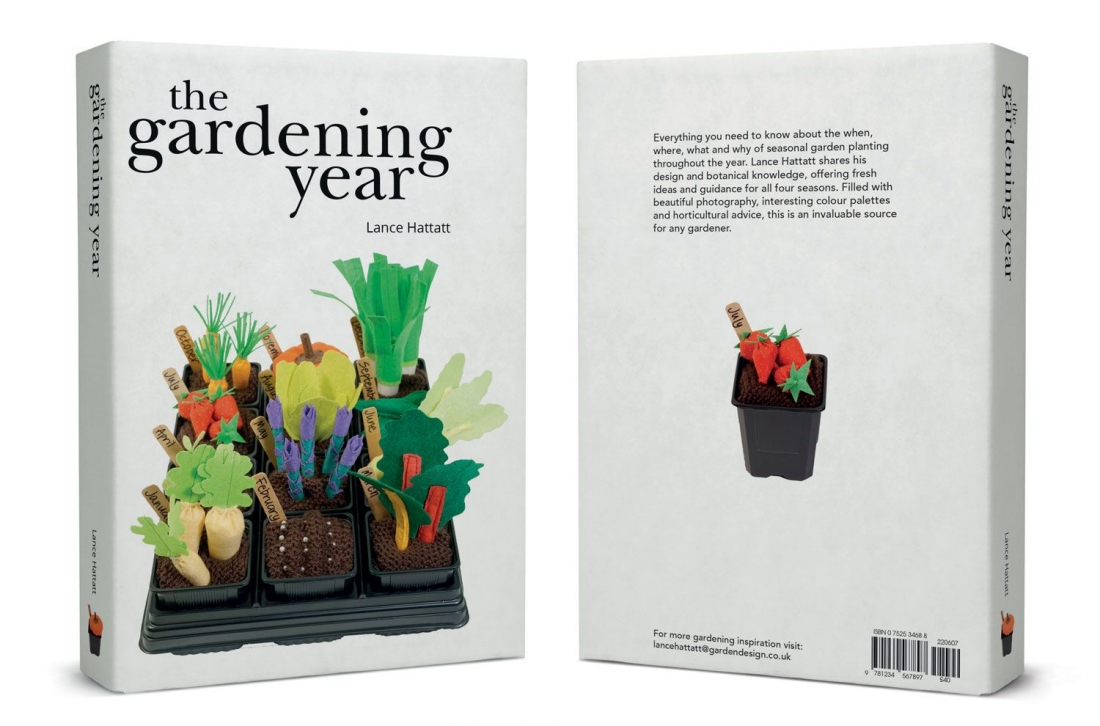 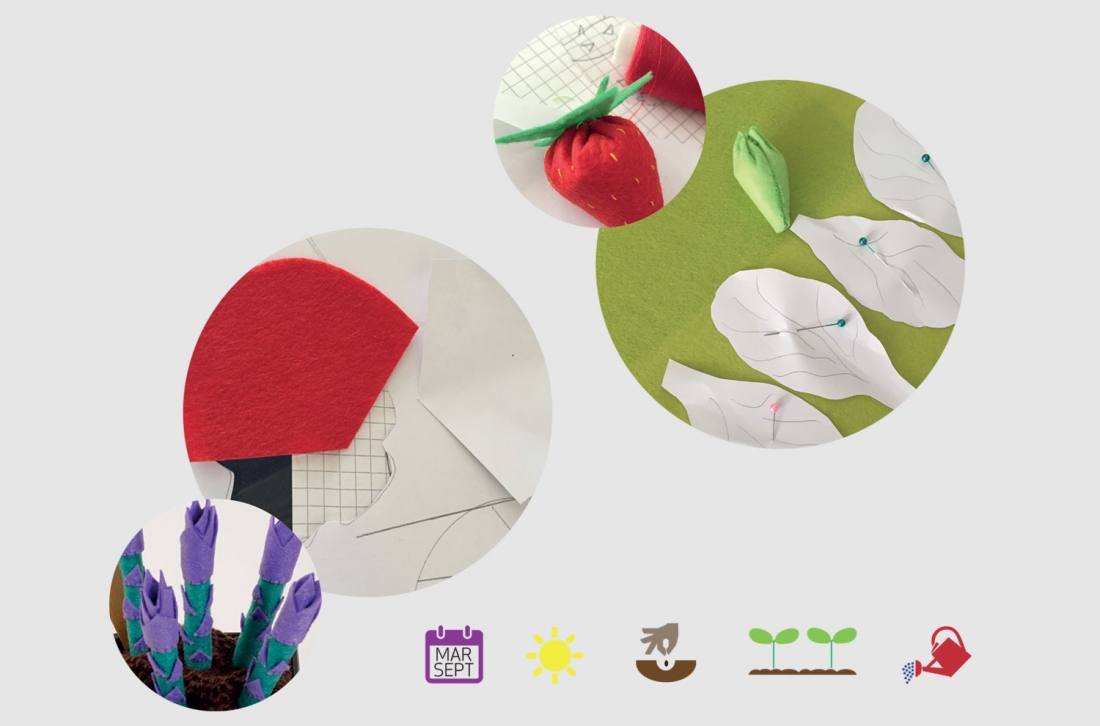 Daniel Kan went down a fairly dark route with his interpretation of Hannah Kent’s Burial Rites. Not surprising when the lead character is accused of double murder and witchcraft. To craft his flesh-type cover, Daniel used various dyes, canvas and egg yolk along with an embroidery needle, human hair, moss, pebbles, pigskin and pine needles. 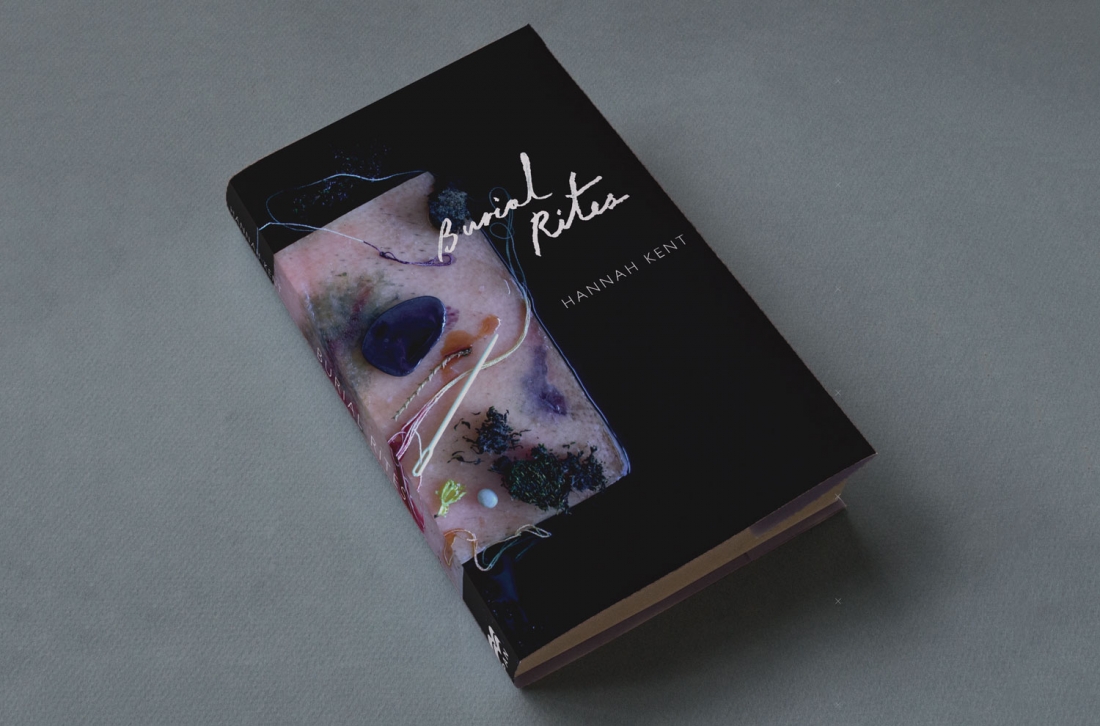 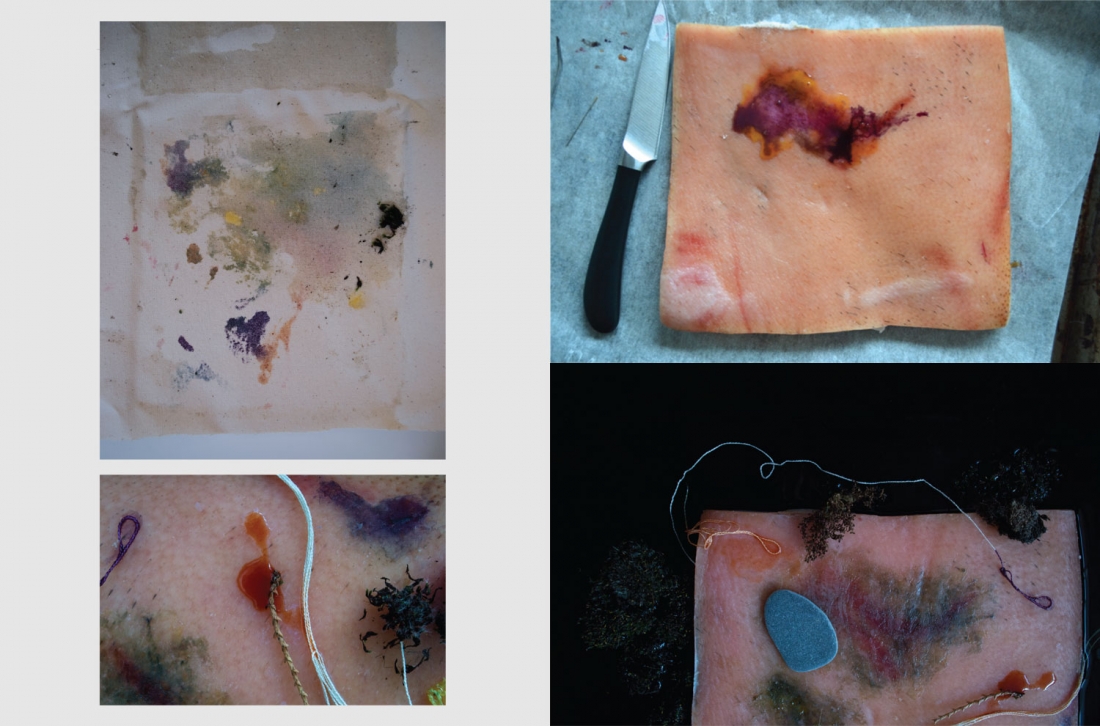 London designer Ella Murray chose Lewis Carroll’s classic, Alice’s Adventures in Wonderland, for her book cover but she added a contemporary twist. Using a photograph of a more modern Alice and then applying a needle and thread to add colour and drama, Ella’s final design is distinctive and unique. 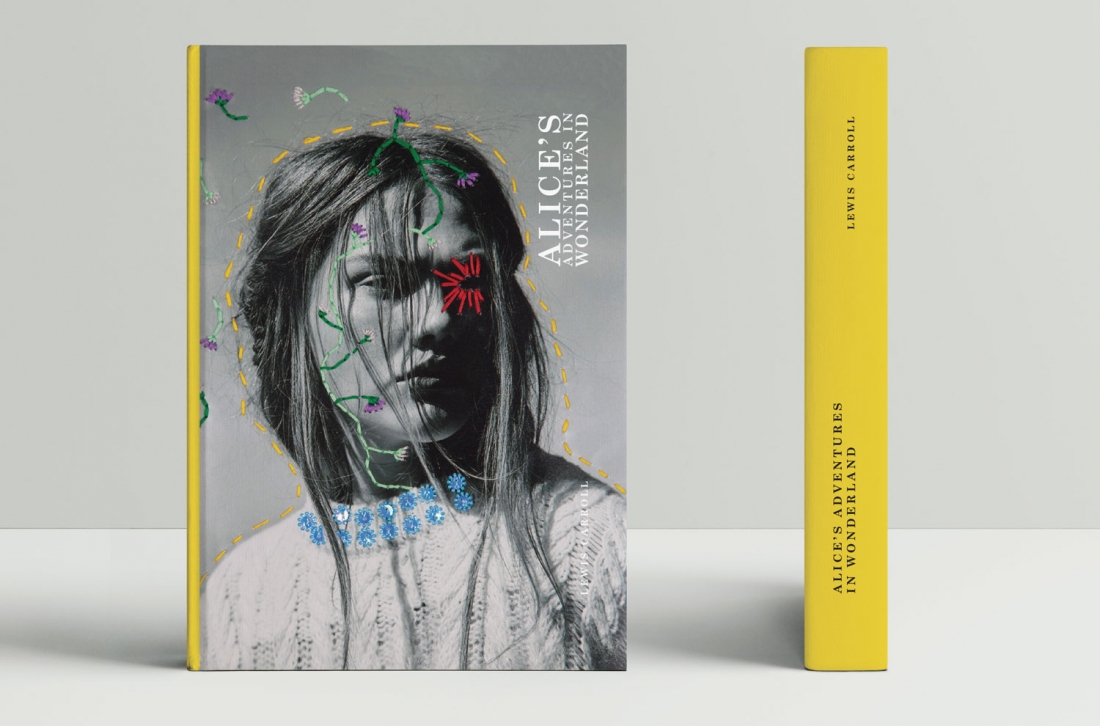 Taking a political angle, Greg Morrison was inspired to create a fresh cover for Donald Trump’s The Art of the Deal. “A best-selling business book becomes a junk food portrait, with a side of social commentary,” explains Greg, one of our Shillington graduates from New York.

With liquorice lips for Donald’s famous pout, chicken nuggets for his ears and french fries for his blonde hair, this is a cover almost good enough to eat. 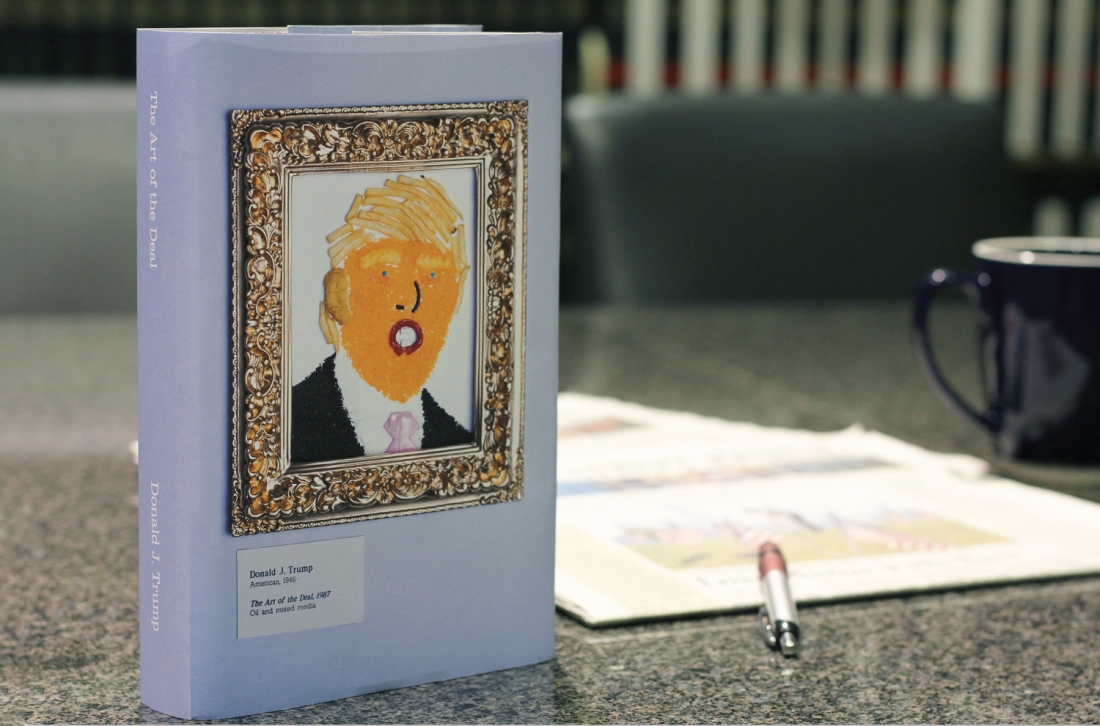 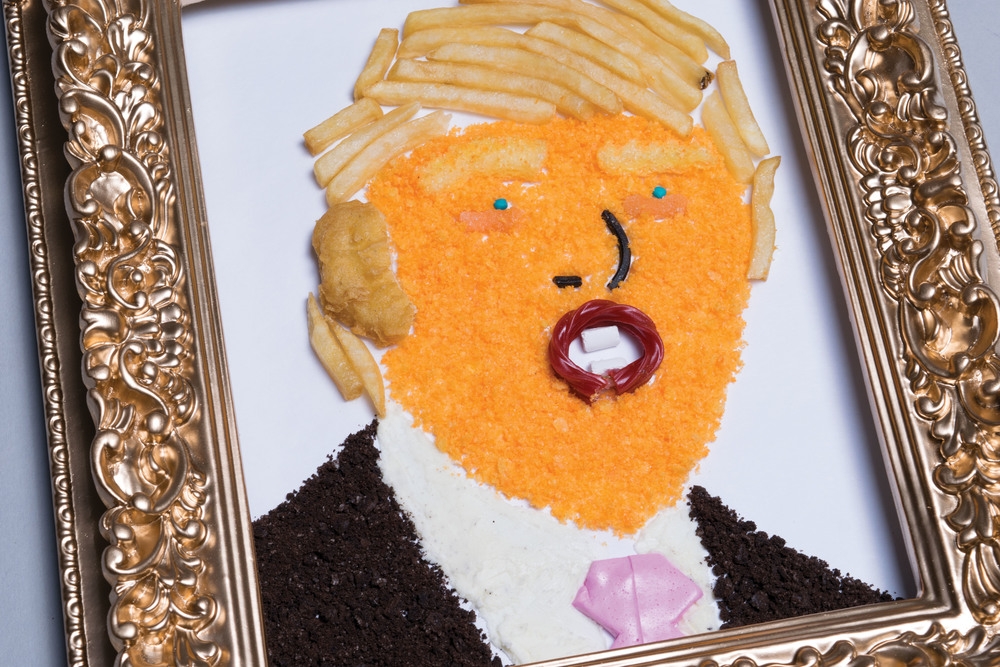 John Cox took on the epic challenge of reimagining Rudyard Kipling’s The Jungle Book and we think you’ll agree, it’s rather wonderful. Cutting out six different layers of thick white paper, John played with light and shadow to create depth, texture and various shades of grey.

“Mowgli faces many challenges in the jungle during the story, obviously climaxing with his battle with Sheer Khan,” says John. “I wanted to highlight this with my cover while also showcasing Mowgli’s bravery. I illustrated a picture of Mowgli looking deep into the belly of the jungle in the gaping mouth of his adversary.” 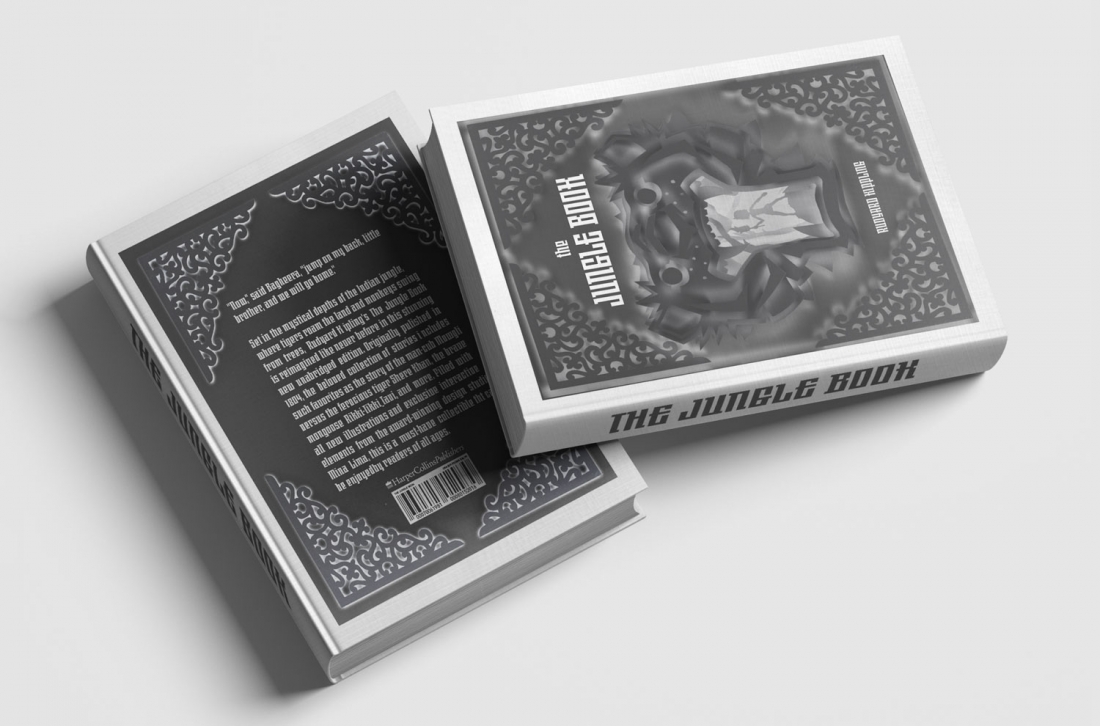 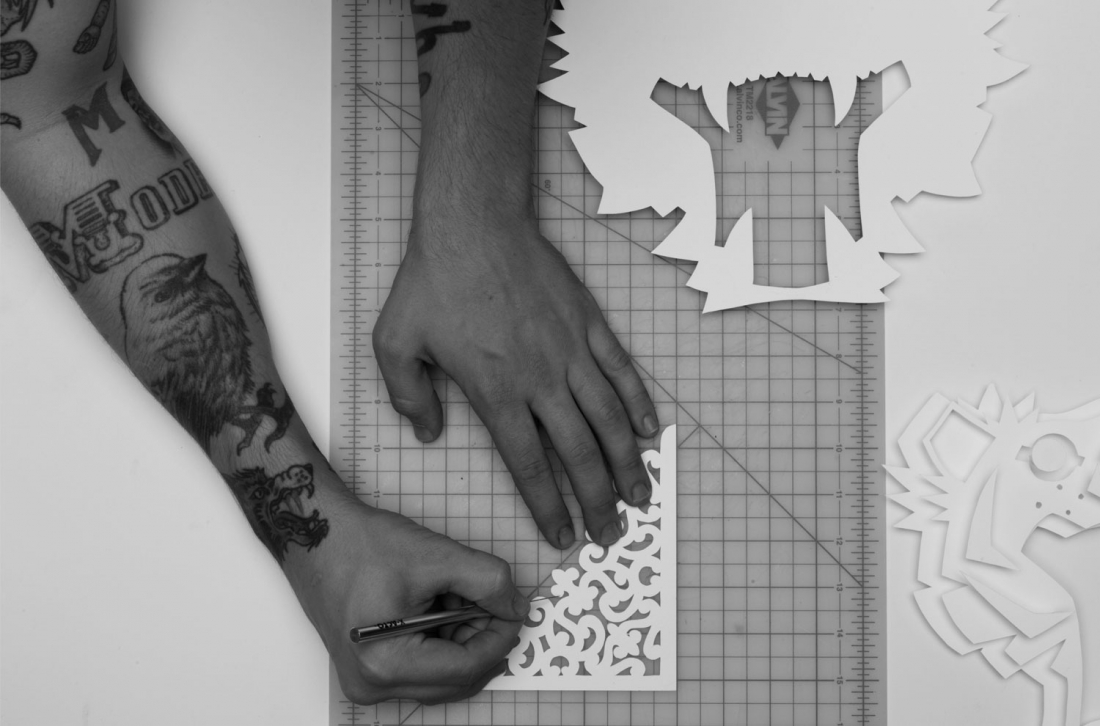 Kirsten McColl, who has quite the impressive portfolio, decided to come up with her own book cover design for Haruki Murakami’s novel 1Q84, featuring handmade typography and other appealing elements. A beautiful piece of work. 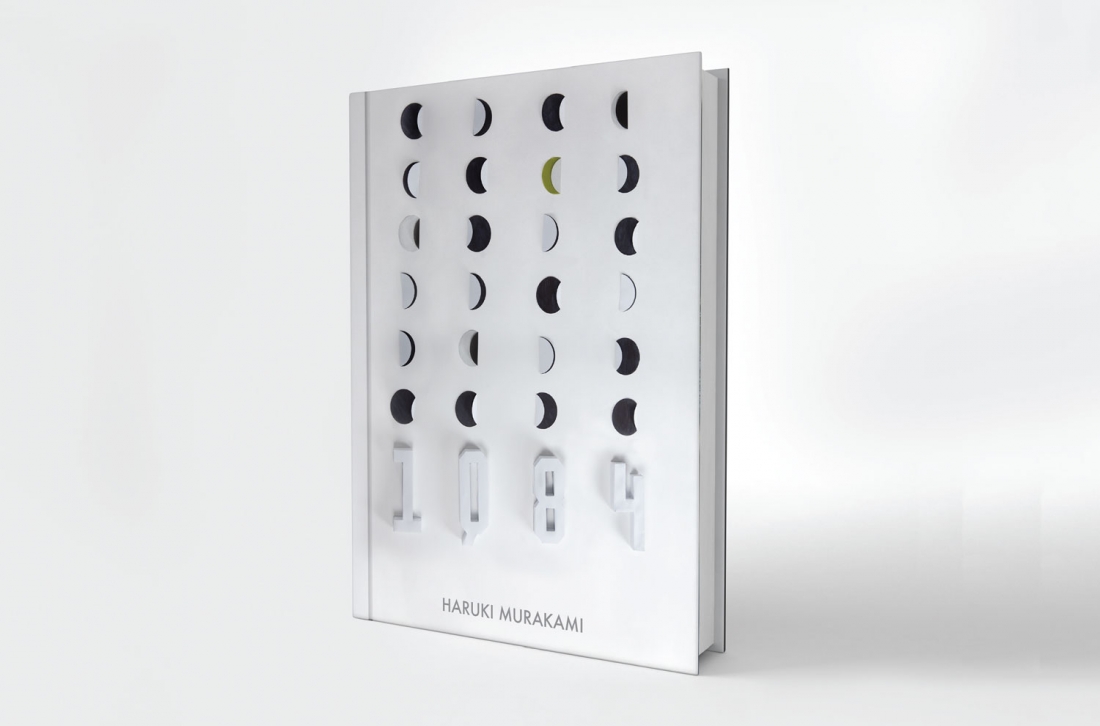 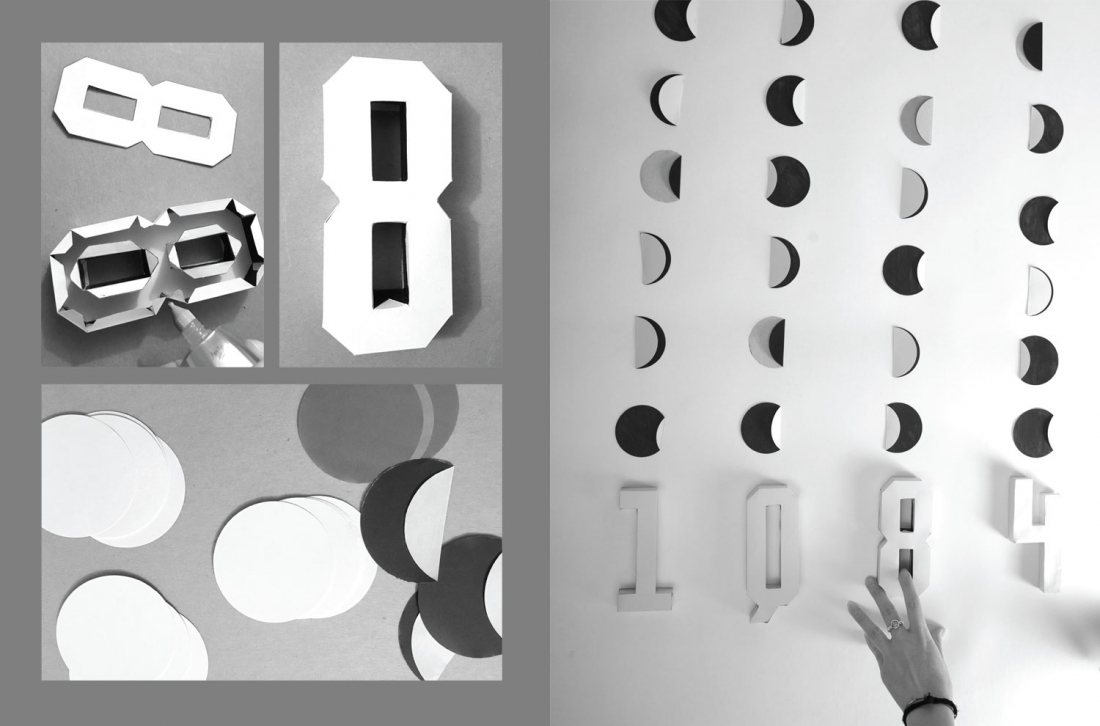 New York’s Kyra Price crafted a handmade typeface and book cover for her version of Nayyirah Waheed’s Salt, featuring short, yet powerful and textured poems. From minimal salt typography on white to letters cut and aligned by hand, this is a design definitely worth admiring. 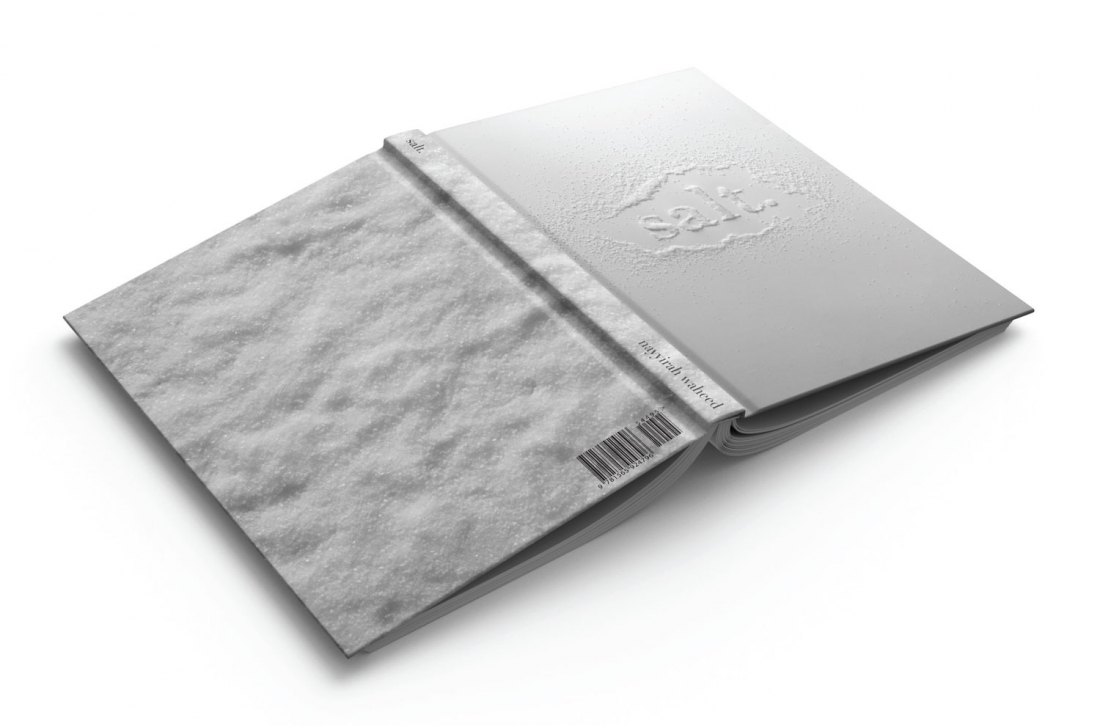 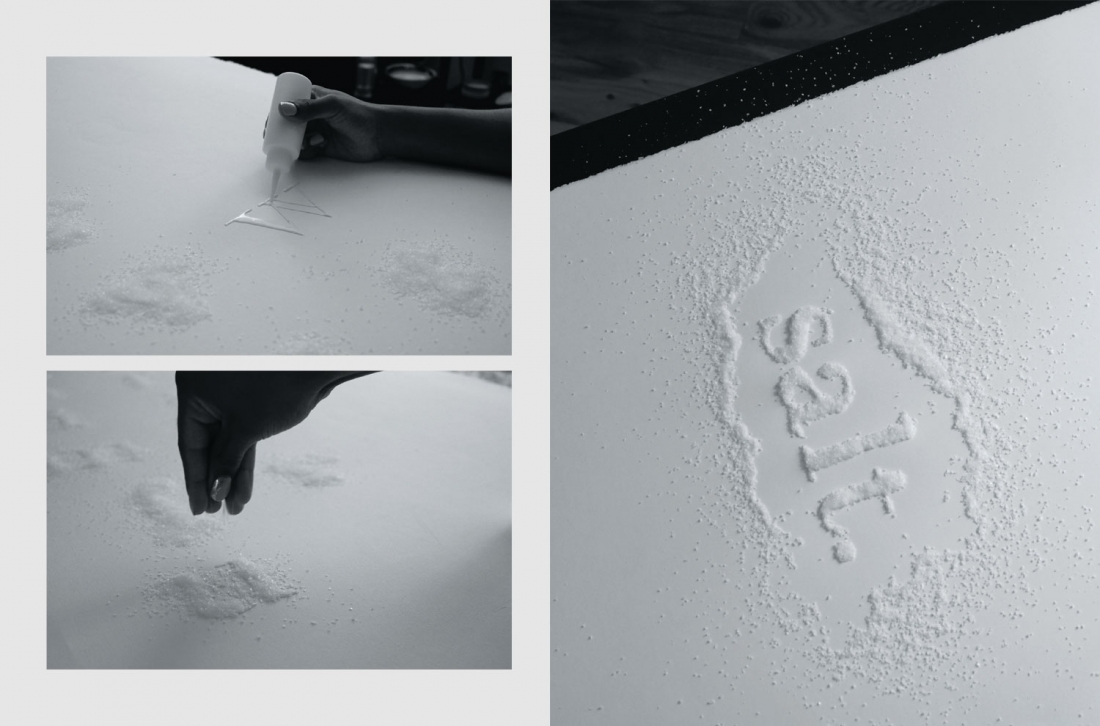 The Metamorphosis is a novella written by Franz Kafka which was first published in 1915. It’s a title that inspired Marina De Salis to come up with a new book design – one that would bring the classic text into the 21st Century.

With typography digitally crafted out of various insects, curved and manoeuvred into different letters, it’s a beautifully executed idea. 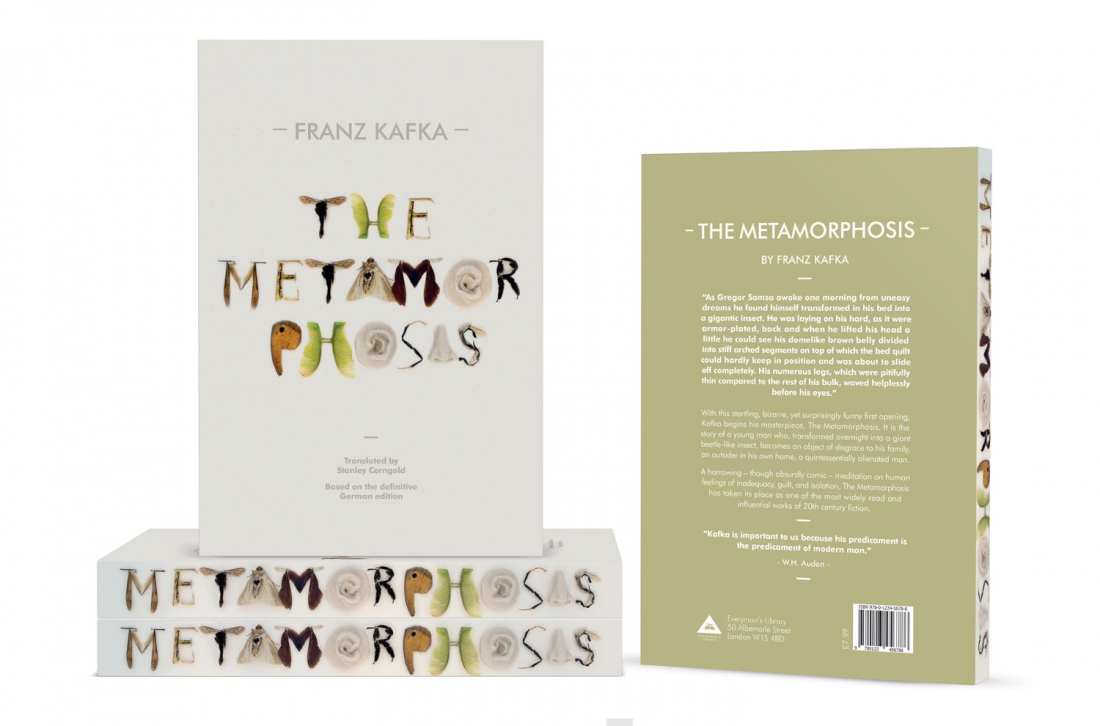 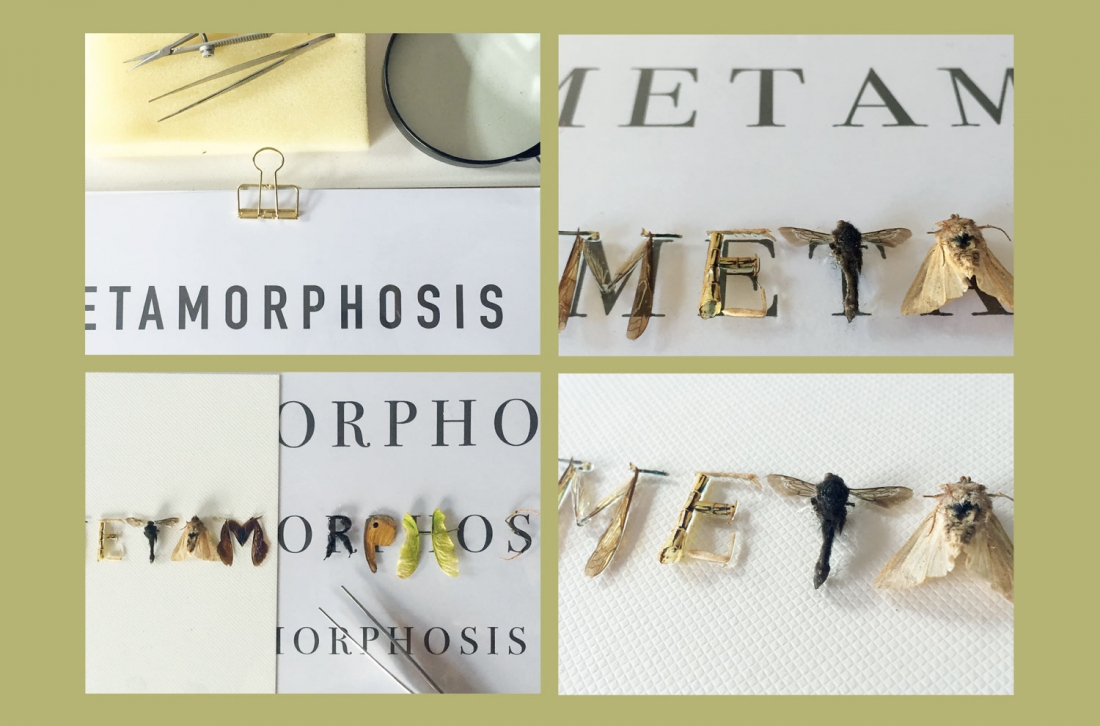 Here’s another contender for Alice’s Adventures in Wonderland – because who doesn’t love Lewis Carroll’s literary classic? Nicole Koncz from Sydney decided to delve into the overarching theme of the story: “I subverted the idea of a traditional book cover by using the physical inside pages of the book on the outside.

“I took the book apart, tore holes in each page and layered them to create the illusion of the rabbit hole. Just as Alice falls into Wonderland, the reader is consumed by the book, and falls in after her.” 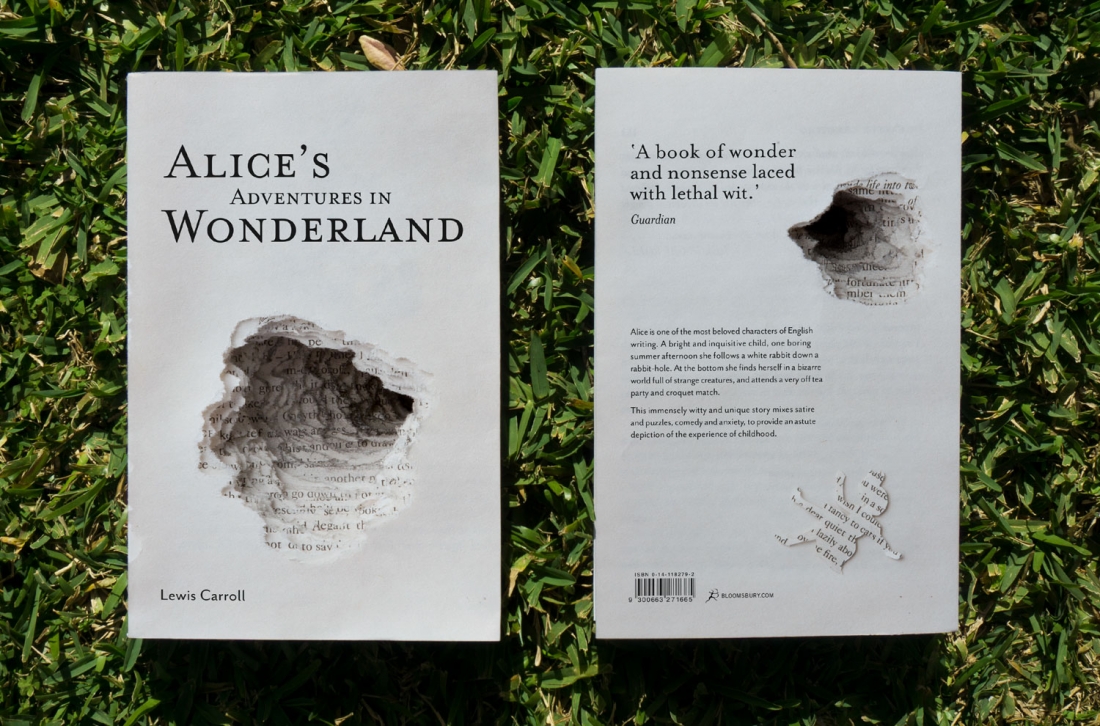 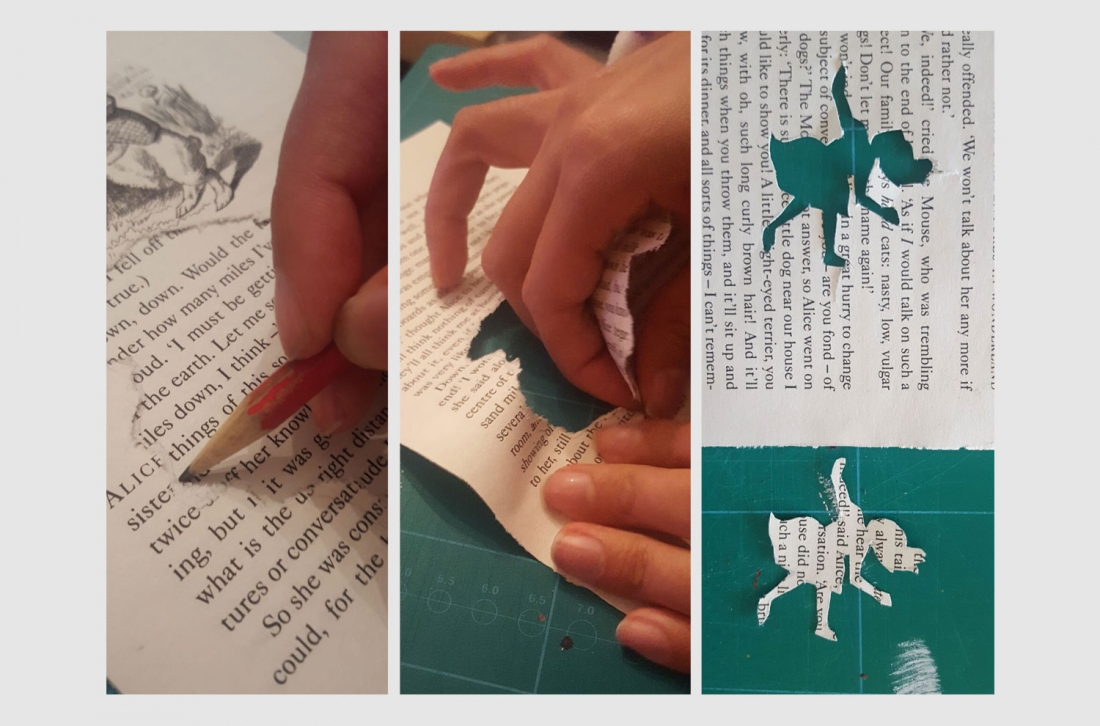 We love this fresh and vibrant approach to one of America’s bestselling cookbooks of all time, Joy of Cooking. In fact, there’s clearly real joy in Nina Caldas‘s cover design. Stuffed to the brim with chopped herbs, fruits and vegetables, Nina has carved out white space to spell out the title of this authoritative American classic. 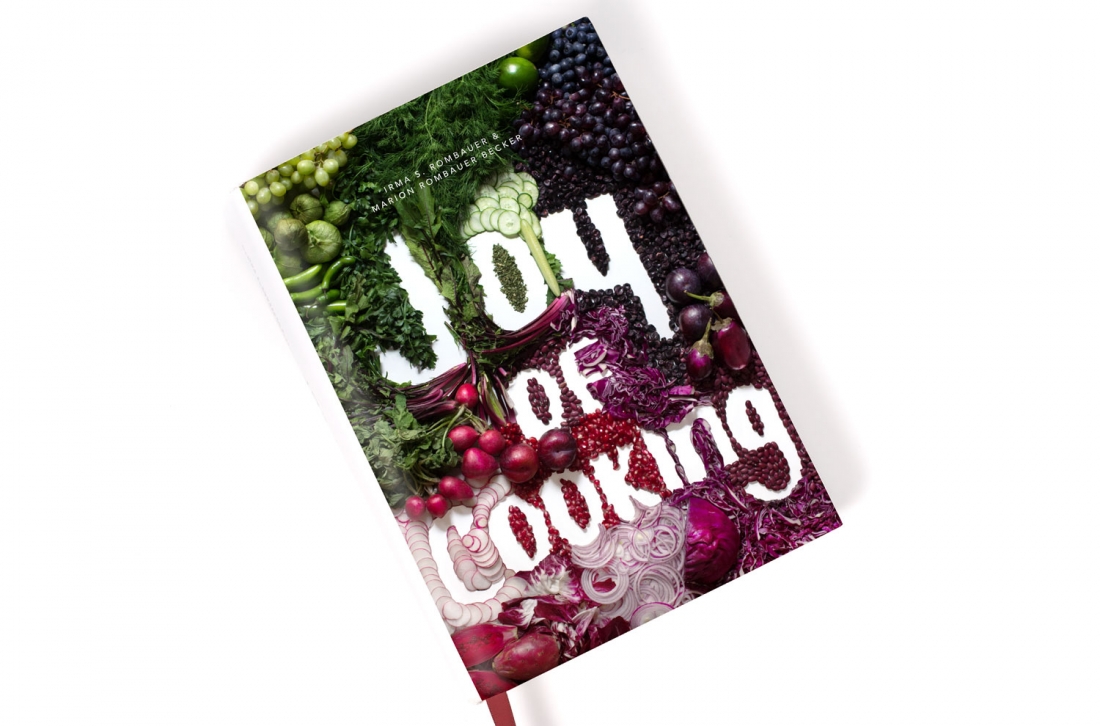 Olga Romanova looked to The Collector for her fictional cover design – the 1963 debut novel by author John Fowles. Her handmade origami butterflies pinned to a board represent the curious and mysterious plot of the novel. 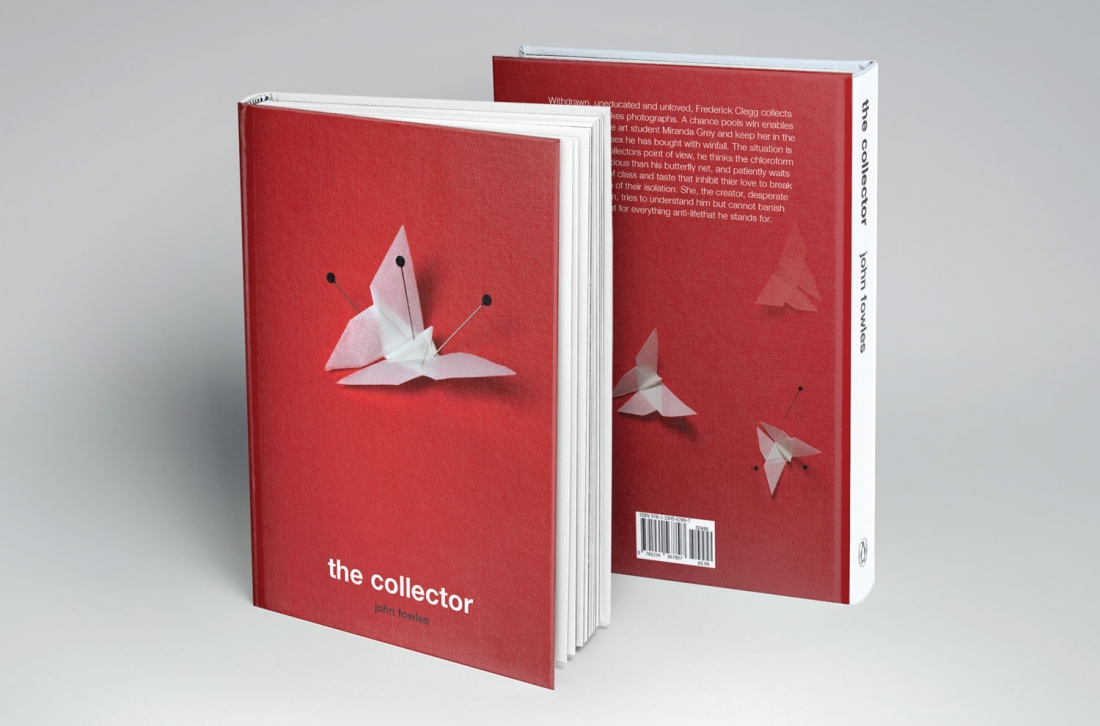 Ray Wong was moved by Extremely Loud and Incredibly Close by Jonathan Safran Foer, a bestselling novel about tragic loss and the aftermath of 911. Ray created an installation for the cover of the book to portray the emotional journey of the characters in the story. 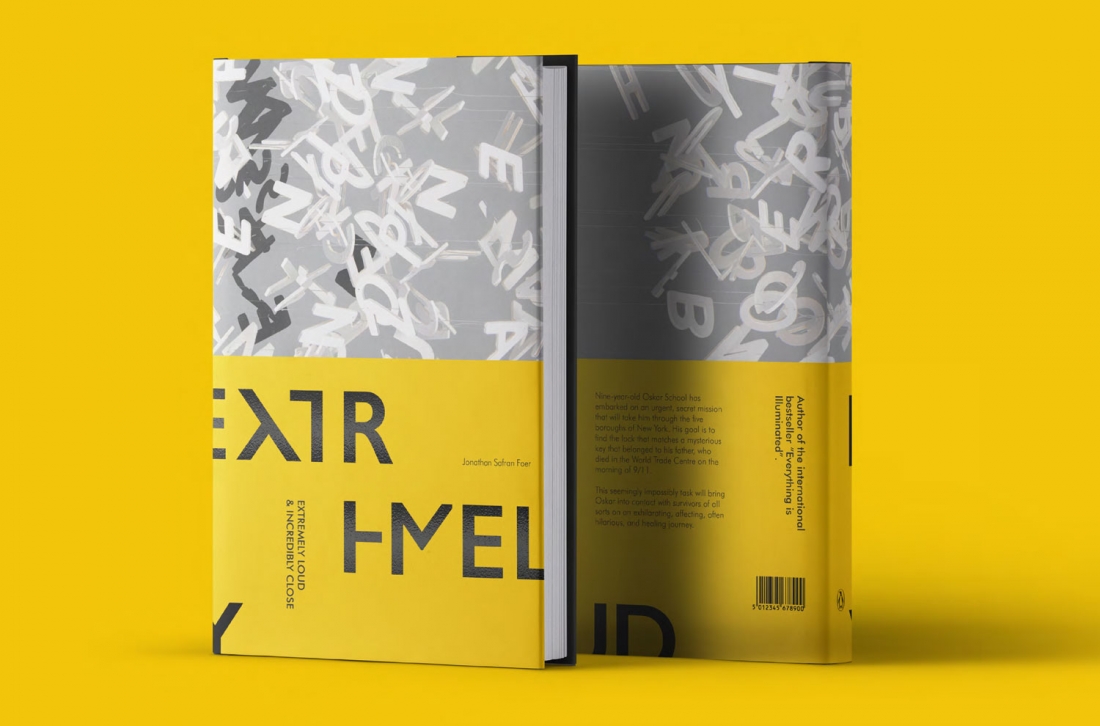 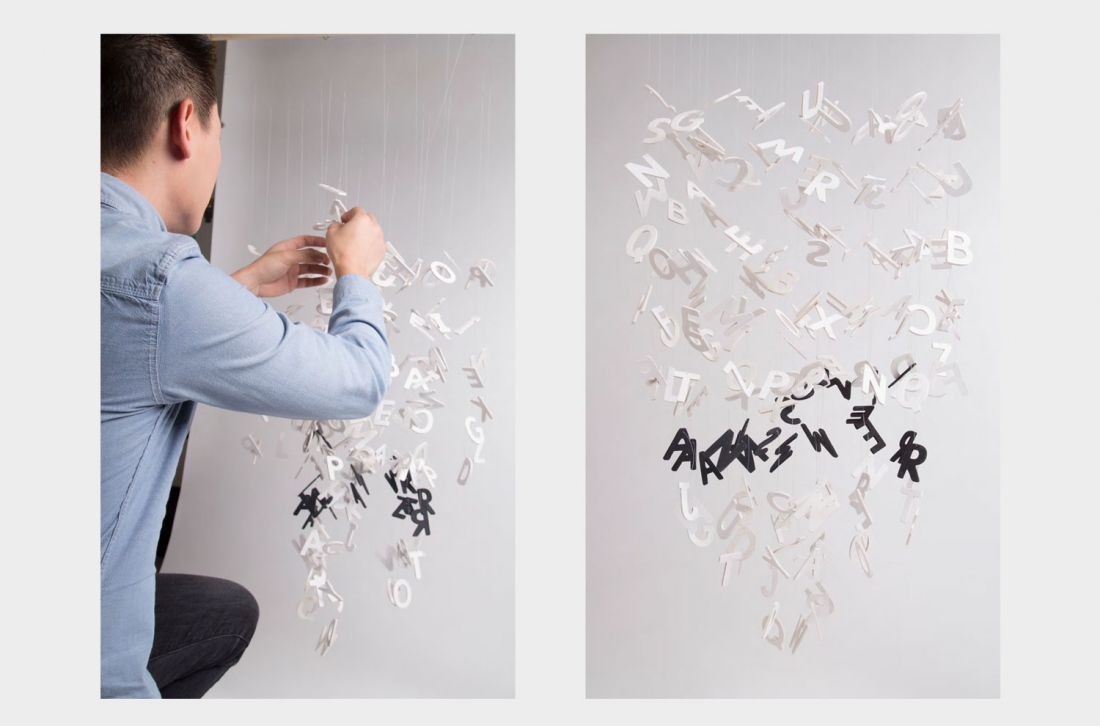 Renée Lemieux looked to Zadie Smith’s White Teeth to sink her own teeth into crafting an alternative book cover design. Using a bright and bold palette, Renée created multicoloured typography by cutting, layering and glueing each letter to hint at a rainbow against a blue and cloudy sky. 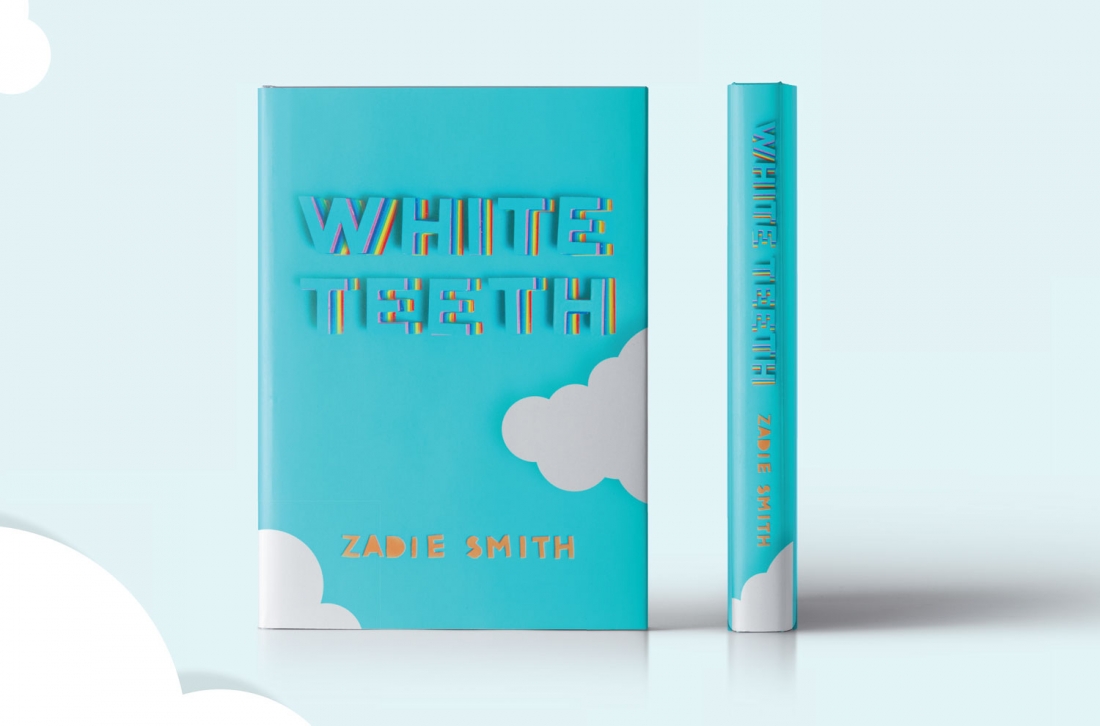 For her book cover, Sydney’s Sam Alexander was inspired by Sidewalk Flowers, a wordless picture book by Jonarno Lawson that features a little girl who collects wildflowers while her distracted father pays her little attention. Using multiple layers of card, cut into flowers, petals and leaves, Sam’s design is rich, colourful and inviting. 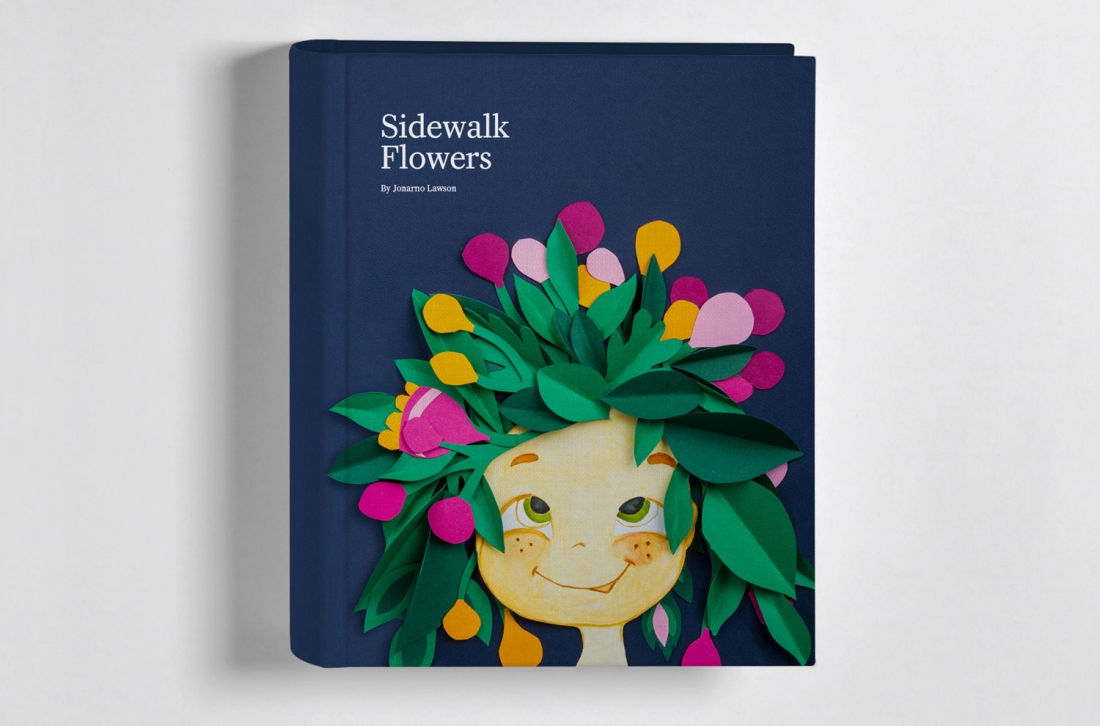 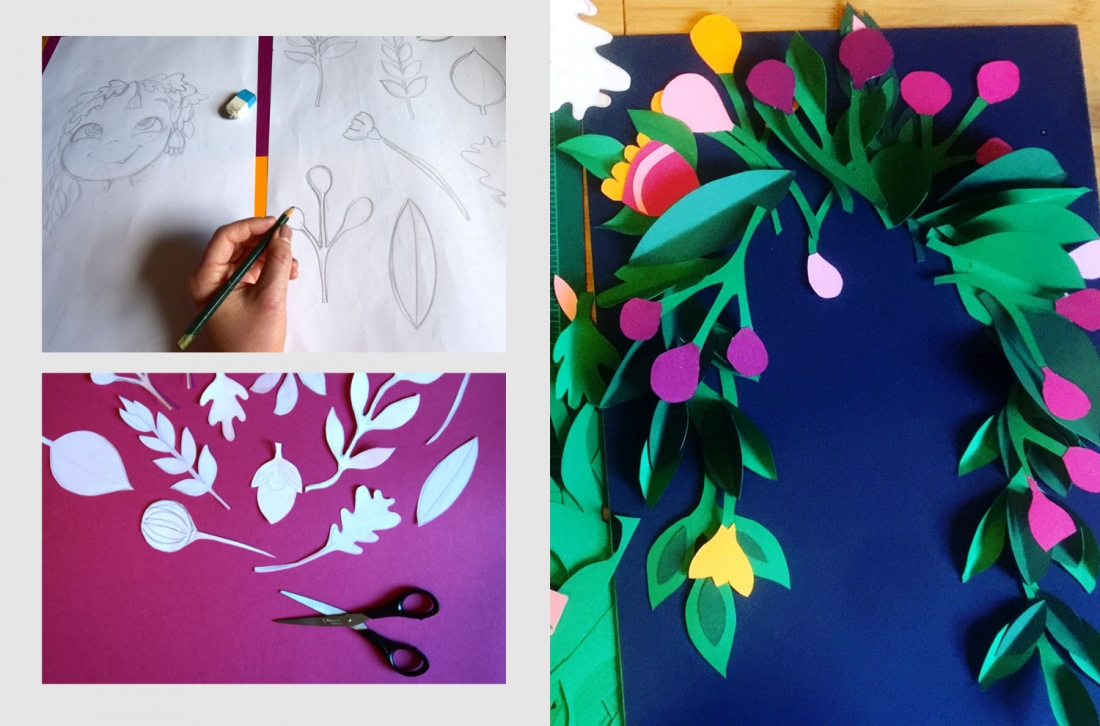 Sam Jacobs—a Shillington graduate who has landed his dream job at Time Inc. – designed a handmade book cover for The Amazing Adventures of Kavalier & Clay, taking inspiration from the superhero elements of the story. His design for Michael Chabon’s book includes a key, intricately carved out of the tip of a pencil. Incredible. 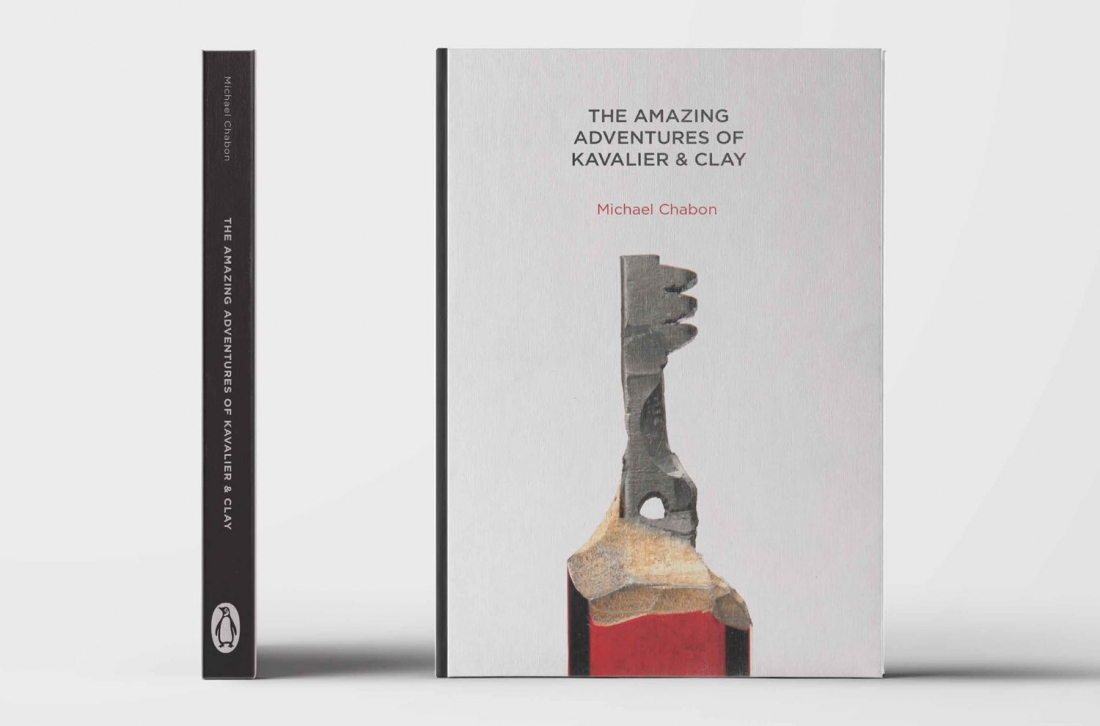 Betty Friedan’s The Feminine Mystique formed the basis of Sophie Forman’s book cover design. She wanted to create a jacket for the 1963 seminal feminist classic using handmade objects, like a burnt oven mitt covered in beautiful illustrations hinting at the book’s contents. 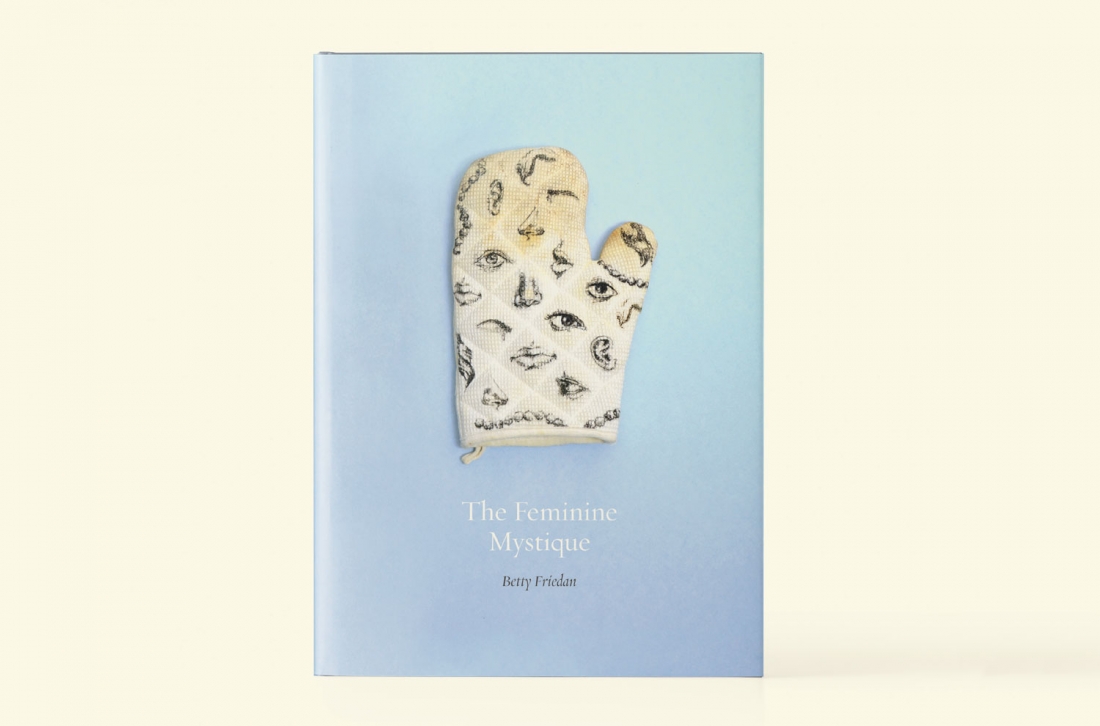 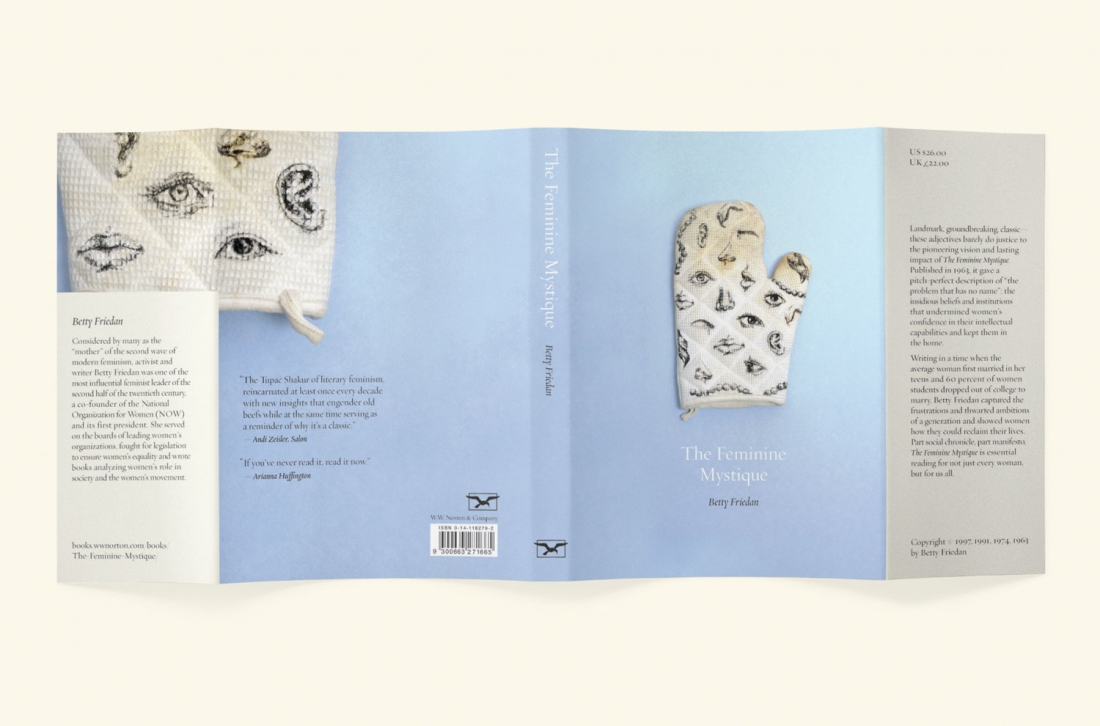 Want to see more amazing work from our graduates? Have a peek at some more round-ups such as 20 Packaging Designs by Shillington Students We Wish Were Real, or read reviews straight from the graduates about what it’s like to study at Shillington in 14 Unbiased Reviews of Shillington.

Head to our website to find out more about what we teach and when our next info sessions are in our London, Manchester, New York, Sydney, Melbourne and Brisbane campuses.

It's no secret that Japanese design—encompassing architecture, fashion and, of course, graphic design—is renowned all over...

Congratulations to New York graduates Liam Speranza and Nneka Njoku for the GDUSA Students to Watch in 2021 feature! We are...

Big congratulations to our two Shillington winners of the TDK ’20 Awards! The competition is now in its 8th year, with...

Once upon a time, graphic design blogs were all about eye candy. But while there's nothing wrong with that, recent years have...

Graphic design competitions, awards and website features are a great opportunity to gain recognition for your design work...

At the start of 2021, Shillington were approached by Print Social, an accessible, sustainable pre-sale platform based in South...

We're so excited to announce that 11 Shillington graduates and 6 Shillington staff projects were selected for the 2020 American...

Kickstart your creative career at Shillington.